Mindfulness has become the elixir for all that ails us. Stress, performance, focus, anxiety—mindfulness is the remedy. However, recently, some have deemed mindfulness as damaging, unsettling, and even narcissistic. Yet these benefits and flaws are often taken out of context.

So, then, how should we view mindfulness? Is it religious, secular, spiritual, materialistic, Eastern, psychological, just a technique, or something else?

Our Inquiry into “American Mindfulness”

First popularized in America about five decades ago, meditation and mindfulness can evoke numerous views. As a Buddhist and experienced practitioner, teacher, and student, I will explore the evolution of “American mindfulness” in this four-part blog series. (I offer my personal journey.)

Part 1 explores the secular version of mindfulness in the US with the rise of McMindfulness.

Parts 3 and 4 explore the core Dharma teachings (see the meaning of dharma) and how we might integrate them into a more holistic view and practice of mindfulness.

NOTE: To support the learning in this blog series, we’ve created a page of terms, citations, and resources. Items in the blog followed by a number (1) or letter (a) are found on the resource page. Items with a lower roman numeral [i] are found in the endnotes below.

The history of mindfulness in America has three main sets of supporters.

In 1976, Joseph Goldstein, Jack Kornfield, and Sharon Salzberg founded the Insight Meditation Center. This retreat center emulated their experiences of living the dharma and practicing Buddhism in South Asia, where they studied.

To practice meditation is to look deeply in order to see into the essence of things. With insight and understanding, we can realize liberation, peace, and joy. Our anger, anxiety, and fear are the ropes that bind us to suffering. If we want to be liberated from them, we need to observe their nature …

Observing “the essence of things” is a process of studying and practicing mindfulness during and after meditation. Author and dharma teacher Joseph Goldstein (2), whose book Mindfulness: A Practical Guide to Awakening is based on the Satipatthana Sutta, describes that process of observation slightly differently, with an emphasis on present moment awareness:

The most common understanding of mindfulness is a present-moment awareness, presence of mind, and wakefulness. … Whenever we’re lost or confused about what to do, we can simply come back to the present moment experience.

This blog series explores how the Buddhist wisdom traditions, so often omitted in contemporary mindfulness, can bring these two definitions together.

To accommodate the health profession and mainstream society, Kabat-Zinn downplayed and separated mindfulness from its Buddhist cultural or scriptural context while attempting to honor its wisdom, as noted in his definition.

Kabat-Zinn (4) defines Mindfulness as “awareness that arises through paying attention, on purpose, in the present moment, non-judgmentally, [a]nd then I sometimes add, in the service of self-understanding and wisdom.”

Kabat-Zinn’s nuanced blend focused on the attentional aspects of mindfulness to cultivate compassion. He began with a body scan to tune into bodily sensations, note one’s thoughts, and label feelings for better emotional regulation. His attempt to bridge these two worlds, however, got lost in translation as teachers routinely simplified the wisdom to a technique to “reduce stress.”

Studies on mindfulness have repeatedly shown a reduction in stress, a slowing of our reactive self, better emotional regulation, and improved overall presence.

This research shows mindfulness training can alleviate stress on the job, empowering employees with the right tools to succeed better at tackling responsibilities and communicating effectively to boost productivity.

Ironically, Jon Kabat-Zinn’s compassionate approach gave rise to mindfulness as a performance drug, showing that managers who meditate daily are more likely to make smarter financial decisions. Other benefits include the following: 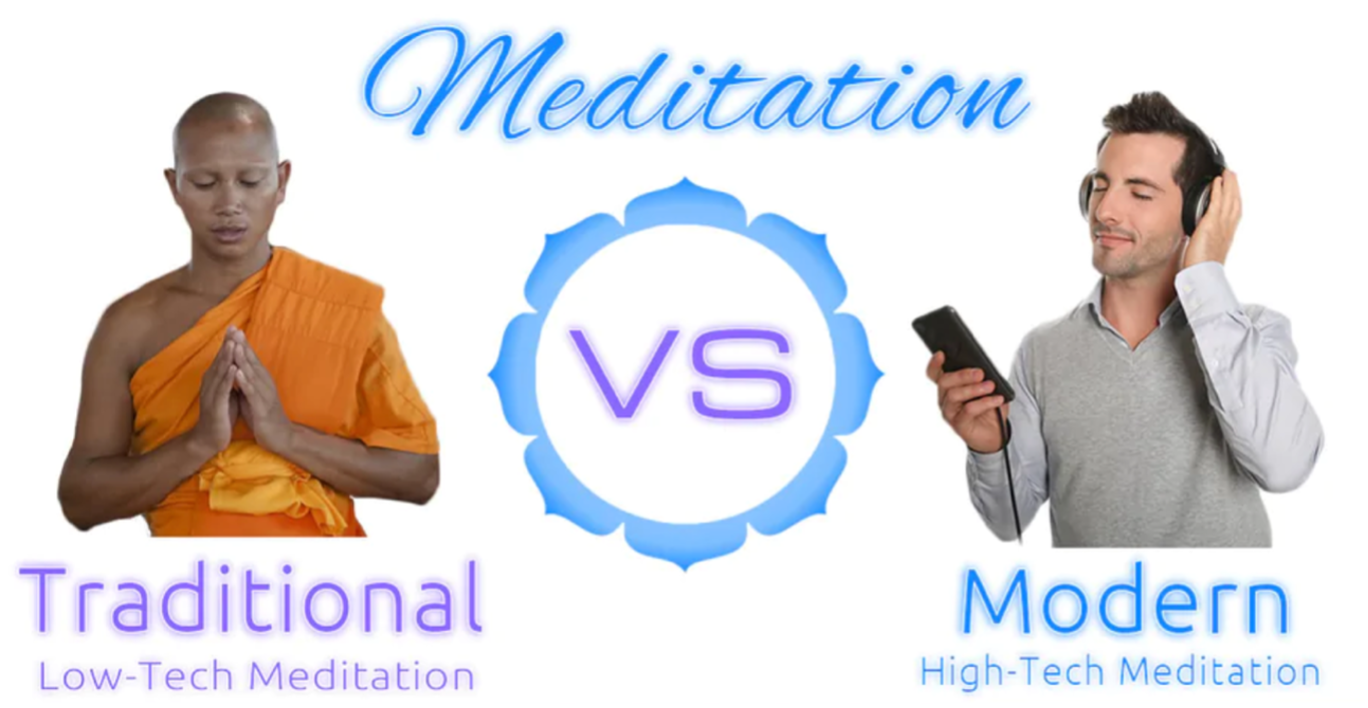 Regrettably, the scientifically secularized mindfulness method arising out of American capitalism strips out the core wisdom of the practice, a point emphasized in a 2019 Guardian article (c), How capitalism captured the mindfulness industry:

Instead of letting go of the ego, McMindfulness promotes self-aggrandizement; its therapeutic function is to comfort, numb, adjust and accommodate the self within a neoliberal, corporatized, militarized, individualistic society based on private gain.

I addressed this materialistic mindfulness in a 2018 blog.

Bluntly, over the past three decades, American Mindfulness has appropriated, exploited, and reduced a time-honored, wisdom-based practice into a branded commodity. Our capitalistic system promoted McMindfulness via digital apps and workshops while simplifying and condensing teacher training, with unfortunate side effects, as noted in this article on the meditation app Headspace that scaled so fast that it stressed out its own employees.

This trend isn’t new; it follows the cultural appropriation of yoga from a spiritual wisdom practice into a fashionable fitness routine to improve looks and status.

The term McMindfulness was first used by Buddhist psychotherapist and meditation teacher Miles Neale in a 2011 blog (a), On McMindfulness and Frozen Yoga: Rediscovering the Essential Teachings of Ethics and Wisdom. Neale characterized Americans as follows:

Notorious for extrapolating what they idealize, plucking the desirable from foreign cultures and simply disregarding the rest. …[and] prone to seeking quick fixes … lacking the patience and long-term commitment needed for lasting change. Are the yoga boom and mindfulness fad yet other instances of these Americentric inclinations?

Mindfulness is more similar to an artistic process than a performance goal, as expressed 50 years ago by meditation master Chogyam Trungpa (15):

The artistic and meditative traditions of the East have always been very orthodox and conservative … In the West, particularly in the 20th century, people do not always want to go through such thorough training. But that approach is very chancy. The problem with the quick training approach is that it is marked by impatience and aggression. … Such an approach to art does not work.

Mindfulness taps into our innate wisdom. We recognize and dissolve craving, egotism, and aggression through increased awareness while cultivating clarity, patience, and compassion.

McMindfulness, however, seeks a quick calm that undermines the patience and perception that can dissolve cravings and aggression. It rejects the very wisdom that is core to mindfulness.

The term McMindfulness was born out of the concept of McDonaldization coined by sociologist George Ritzer. In his 1993 book, The McDonaldization of Society (13), Ritzer identifies when a society adopts the characteristics of a fast-food restaurant: this includes the homogenization of cultures because of globalization and scaling, which reduces nutritional value or quality.

In their original 2013 blog post (b), Beyond Mindfulness, Ron Purser and David Loy admonish this denaturing trend:

Rather than applying mindfulness as a means to awaken individuals and organizations from the unwholesome roots of greed, ill will and delusion, it is usually being refashioned into a banal, therapeutic, self-help technique that can actually reinforce those roots.

Since its introduction to America, meditation and mindfulness have been secularized for various reasons. In Part 2, I examine this trend, as noted in Purser’s 2019 book, McMindfulness: How Mindfulness Became the New Capitalist Spirituality (12).

Separated from its ethos, or “nature,” various forms of McMindfulness:

If people consume products without ever moving beyond the need for consumption, McMindfulness offers a materialistic practice—and justification—for not changing. This is the very antithesis of the traditional ethos that grounds mindfulness practices. 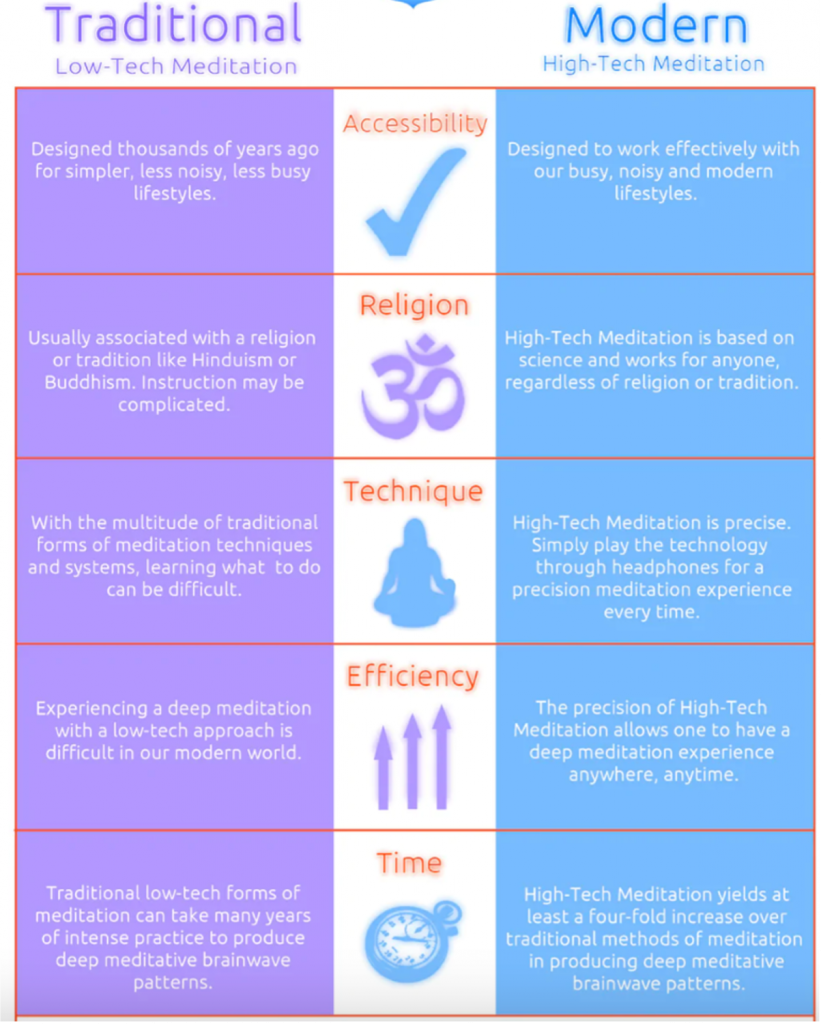 This ad exemplifies the promotions used for McMindfulness, positioned against more traditional efforts. 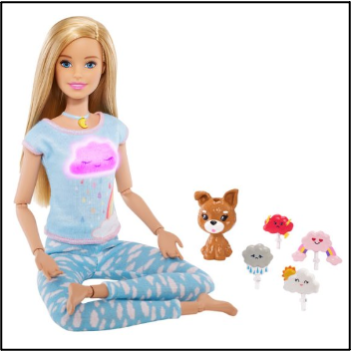 A newly minted meditation barbie in a half-lotus posture has surfaced the impact of these questions. Perhaps, a “dolly lama” Barbie “will make people more curious about mindfulness,” claims its inventor. The notion here is that the “focus on breathing is a way to get in touch with your emotions” and take better care of themselves.[ii]

But what happens when we access uncomfortable emotions, anxiety or confusion?

Is mindfulness a pill I take to relieve pain or a practice I embody with traditions, study, training, and wisdom?

Popularizing mindfulness might be good in the right, authentic context. But Neale details the following:

Our American culture is fascinated by quick fixes, glamorous fads and celebrity teachers: yoga and mindfulness are no exception to this trend. What’s next? Drive-through yoga? Meditation on demand? We are experiencing a feeding frenzy of spiritual practices that provide immediate nutrition but no long-term sustenance.

So then, what is Barbie selling? Is she selling a technique (pill) to rid stress or a ritualized practice—like playing the piano—that gradually develops our mind, habit, and skill to become an artist?

In sum, McMindfulness keeps us ignorant of our individualism and consumer-oriented socialization.

Practicing mindfulness with the Buddhist ethics and wisdom leads us to investigate the causes of any excess craving.  This would undoubtedly confront American consumerism and systems of capitalism, education, entertainment, and so forth.

If Americans became just 10% more aware of their consumption and clinging, would our GDP plummet? After all, consumer spending comprises 70% of GDP.

McMindfulness manages our symptoms, which works just fine to obscure the causes while enabling exploiters to profit from our confusion.

In Part 2 of this blog, I unpack the different critiques and effects of American McMindfulness and its slow demise of wisdom.

1- See our webpage for Terms and Resources for support.

3- See our Commitment to Buddhist Psychology.

[i] Hanh, Thich Nhat; Transformation and Healing: Sutra on the Four Establishments of Mindfulness; Sept 9, 2002