What is the cost of discarding the ethics and wisdom from mindfulness? Is there a way to restore the wisdom for lay practitioners or non-Buddhists?

In Part 1 of this blog, I discussed the rise of McMindfulness that emerged from secular mindfulness techniques, which flourished in the wake of the Mindfulness-Based Stress-Reduction (MBSR) method launched by Jon Kabat-Zinn in 1979.

Ironically, Jon Kabat-Zinn’s compassionate approach gave rise to McMindfulness. Much of this involves our American appetite for consuming, reducing, and, thus, simplifying wisdom. I explore this dynamic in Parts 3 and 4 of this series as I set out to recover much of what we’ve lost.

In sum, McMindfulness denatures meditation from its core, from the wisdom, ethics, and mental discipline found in the Noble Eightfold Path.

In this blog, I will examine the different critiques of McMindfulness.

NOTE: To support the learning in this blog series, we’ve created a page of terms, citations, and resources. Items in the blog followed by a number (1) or letter (a) are found on the resource page. Items with a lower roman numeral [i] are found in the endnotes below.

A Menu of (Mc)Mindfulness Critiques

NOTE: Buddhism is quite complex, with various lineages, schools, and doctrines, so this is not a review of Buddhism. Rather, I will review different critiques of mindfulness as commonly practiced in America. When I speak of Buddhist or Eastern wisdom, I center it on specific teachings, practices, or concepts that will be highlighted in Parts 3 and 4.

Pathway to the West 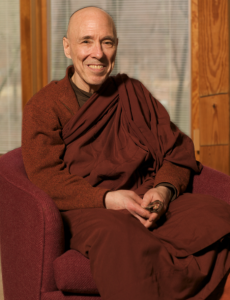 To contextualize these critiques, I offer some thoughts from Bhikkhu Bodhi (born Jeffrey Block) [i]. An American Theravada monk ordained in Sri Lanka and appointed the second president of the Buddhist Publication Society, Bodhi has edited and authored several publications grounded in the Theravada Buddhist tradition.

In his piece, “The Transformation of Mindfulness,” Bodhi (g) addresses two shifts that shaped how mindfulness developed in the West.

The first shift involved “the ‘custodianship’ of the Dharma – the teaching authority – from the monastic Sangha to Western lay teachers.”

Here, Bodhi recognizes the “stultifying” effect the monastery might have on the teachings but also notes that “despite its faults, this tradition has ensured that all modes of Buddhist practice—whether scholarly, ritualistic, or contemplative—are imbued with veneration for the Three Jewels and rooted in a worldview based on the Buddha’s discourses.”

He sees this shift in teaching authority as playing “a monumental role in the revamping of mindfulness and thus in extending it into new domains never found in the Buddhist traditions of Asia.”

The second shift happened later and resulted from the first, as Bhikkhu Bodhi notes:

Multiple factors, woven together into a complex tapestry, contributed to this development, including the American spirit of pragmatism, the declining influence of theistic religion, the triumph of the therapeutic, the human potential movement, the quest for authenticity, the reaction against technological impersonality, and crass American commercialism.

A complete presentation of these issues is beyond the scope of this blog. I will focus on a few that persist today in the form of American Mindfulness or McMindfulness.

First-generation Buddhist practitioners celebrated “American Buddhism” as non-hierarchical, gender-egalitarian, and free of the cultural and religious “baggage” of their Asian predecessors. Jettisoning this religious “baggage,” however, resulted in the emergence of McMindfulness.

Engaged Buddhists David Loy and Ronald Purser responded to the effects of this trend with their 2013 blog (b), Beyond McMindfulness. Most of the critiques of American mindfulness involve its complicity with socioeconomic structural injustice or dismissing traditional ethics and wisdom.

Examples include adopting mindfulness to train sharpshooters in the military to become more effective killers, or using mindfulness to enhance the focus and create “productive workers” in unjust economic systems.

Another critique involves the hyper-modern and scientific view of mindfulness by “experts,” who measure self-improvement benefits for busy professionals to keep them “busy,” focused, productive, and consuming.

Psychologist and dharma teacher Malcom Huxter pointedly states, “The difference is that the contemporary definitions of mindfulness are ethically neutral. In stark contrast, Buddhist mindfulness is ethically wholesome, and an overt effort to live an ethical lifestyle is considered as an essential foundation for the practice.”

Parts 3 and 4 will expand on the misunderstood notion of mindfulness as “non-judgmental” or “neutral.” Indeed, when properly cultivated and developed via an integrated path, we can discern wholesome/skillful and healthy states of mind from those which are unwholesome and harmful to self and others (Bodhi, 2011). [ii]

These critiques argue that teaching mindfulness in these contemporary contexts conflicts with core Buddhist teachings of non-harm, right livelihood, and interdependence. 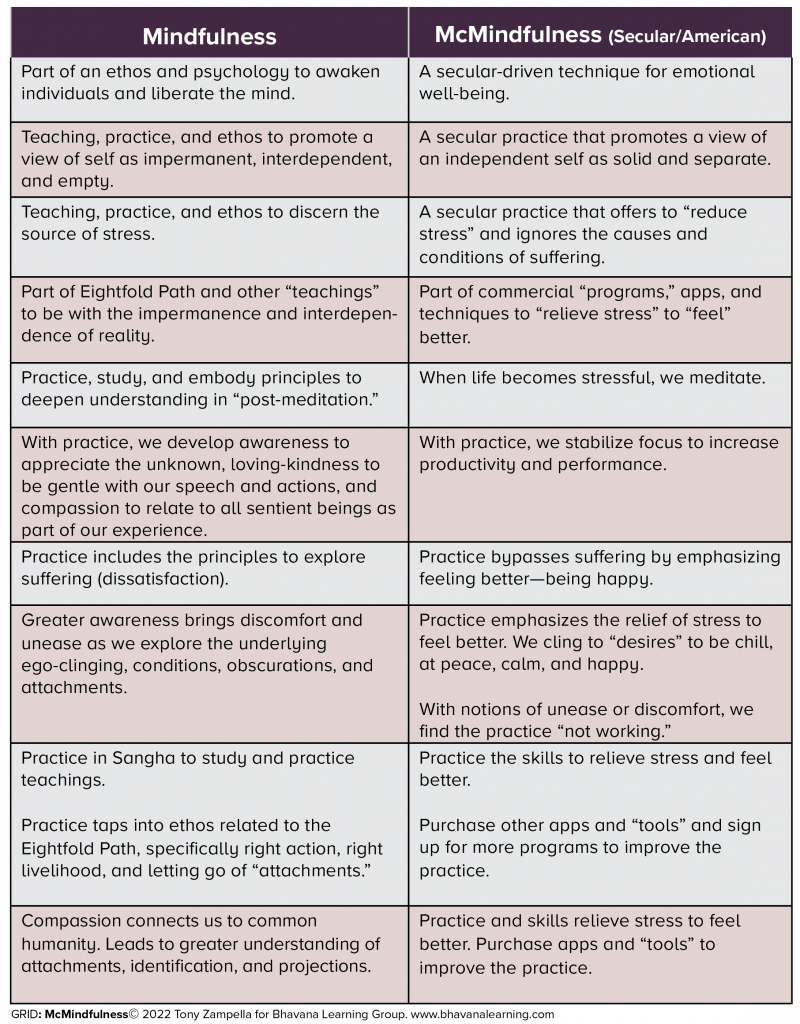 The critical turn refers to a growing acknowledgment of the limitations within Buddhist communities. Although this view acknowledges the scientific and secularization of Buddhism, it encourages a discussion about the problems and pitfalls of these processes.

Some focus on what has been lost by discarding the wider religious context of Buddhism and have called for restoring the neglected aspects of the dharma, such as ritual and community.

The contextual turn refers to understanding how Buddhist practice is “shaped and limited by the specific social and cultural contexts in which it unfolds.” [iii]

Critics have discussed issues of power and privilege in American Buddhism, in which mindfulness has become commodified and assimilated into the context of global capitalism and neoliberalism. Ron Purser develops these ideas in his 2019 book, McMindfulness: How Mindfulness Became the New Capitalist Spirituality (12).

The collective turn refers to individualism as the core of American meditation, here suggesting three paths. Issues include:

a) advocating for building inclusive sanghas,

b) developing relational forms of meditation practice such as external mindfulness, and

c) advancing the concept of “collective awakening” while applying Buddhist principles and practices to the collective suffering caused by racism and capitalism.

Some research claims that mindfulness is dangerous. Many of these claims muddle the term “mindfulness,” the level of expertise, the experience of the researcher, or the absence of Buddhist scholars or practitioners consulted.

For example, a piece, Can Mindfulness Be Bad for Teens? in the magazine Psychology Today claims that “Mindfulness lessons have no positive impact on teens and sometimes increase teens’ depressive symptoms,” while acknowledging that many students did not engage with the process. “In fact, 80 percent admitted they had not done the ‘homework’ for the lessons.”

The article focuses on a single technique of naming emotions, which is perhaps not the best approach to begin developing mindfulness for young people. The article fails to interview any Buddhist scholars working with children (or distinguishing gross and subtle body work.)

Another piece in the same magazine, One Flaw of Mindfulness Meditation, claims to “expose a subtle shortcoming of mindfulness meditation” as the focus on self. It frames mindfulness as “people focusing inward to their own body and mind, and in isolation, that can lead to low levels of focus on other people.”

Writer Arthur Brooks in the Atlantic Magazine responds to these critiques: “Mindfulness is not the same thing as navel-gazing. To be here now does not mean obsessing over yourself and your problems and disregarding others.”

These studies often misunderstand the fundamental relationship between suffering and liberation in mindfulness.

Criticisms and misunderstandings of the practice may differ regarding the purpose and focus of mindfulness. This remains a concern, however: that meditation has been reduced to a therapeutic self-help tool. Pointedly, the goal of awakening and enlightenment has been replaced with emotional well-being [iii].

Meditation master and teacher Mingyur Rinpoche (8), who leads the international Tergar Meditation Community, shares teachings here and here and his own experiences as he works with his pain:

When I first began meditating, I was horrified to find myself experiencing more thoughts, feelings, and sensations than I had before I began practicing. It seemed that my mind was becoming more agitated rather than more peaceful. “Don’t worry,” my teachers told me. “Your mind isn’t getting worse. Actually, what’s happening is that you’re simply becoming more aware of activity that has been going on all the time without your noticing it.”

From a binary view, any emotional discomfort is seen as a problem, and the goal is simply to make problems go away rather than seeing them as part of the remedy. I will address this tension via spiritual bypassing in Part 3.

Unlike Western science, which catalogs and classifies the external world, Buddhist psychology functions as a science of consciousness or interior experiences.

Mindfulness gives access to this interior world. We discover a mind full of untested interpretations, connections, emotional afflictions, and obscurations arising from identification with ideas, concepts of the self, or experiences.

Untethered from the Dharma [iv] (Buddhist doctrine), secular mindfulness can leave us lost and unable to navigate our interior world.

“Mindfulness is not the same thing as navel-gazing.
To be here now does not mean obsessing over yourself and your problems and disregarding others.”
—Arthur Brooks, Atlantic Magazine

Any comprehensive investigation of mindfulness requires a baseline to define the scope, study, and ethical framework of the practice; examine the scope of training; and then make transparent the level of the researcher’s understanding.

Such a context would distinguish between

Becoming awakened or enlightened is distinct from sitting and breathing, just as becoming a runner is different from running.

Many critiques of mindfulness and American (Mc)Mindfulness lack any understanding of the wisdom and ethics set in the Dharma.

Ann Gleig (1) shares one of the main critiques of secular mindfulness: “that the Pali Canon distinguishes between ‘Right Mindfulness’ (Samma sati) and ‘wrong mindfulness’ (miccha sati), and that the former is always inextricably linked to the whole of the noble eightfold path, particularly ethics and liberation.”

Resolving some of these fissures begins with a deeper understanding of the core dharma teachings that are inextricably linked to mindfulness.

We must honor and appreciate, rather than exploit and appropriate, the origins of mindfulness. We need to choose mindfulness as a path to awakening consciousness—even collective awakening—rather than as a therapeutic self-help tool that obsesses over individual needs.

Transcending individualistic attitudes is a knottier proposition. To unpack conditioning that reifies dualistic perceptions, we must recognize the equal and interdependent standing between biology, culture, and first-person experiences – even spiritual ones. [v]

To begin developing an interdependent awareness of self and reality, Part 3 of this blog recovers the ethics of mindfulness as the foundation for awakening.

Finally, scholar Andrew Olendzki (d) expresses a common view of ethics-based mindfulness practitioners in What Mindfulness Is (Not): “The essence of meditation practice is to let go of all your expectations about meditation.”

1- See our webpage for Terms and Resources for support.

3- See our Commitment to Buddhist Psychology.

[i] Bhikkhu Bodhi (born Jeffrey Block) is an American Theravadin monk who obtained a BA in philosophy from Brooklyn College and a Ph.D. in philosophy from Claremont Graduate School. After completing his university studies, he traveled to Sri Lanka, receiving full ordination in 1973 under the leading Sri Lankan scholar-monk, Ven. Balangoda Ananda Maitreya (1896-1998).

[iv] When the word Dharma is capitalized, it means specifically Buddhist Doctrine. When in lower case, dharma is more generalized to mean teachings or “natural law,” “way,” “truth,” or “phenomena.”

[v] Some Western researchers have developed theories to bridge these “perceptual” divides. Transpersonal philosopher Ken Wilber established Integral Theory, an interdependent meta-theory that includes Suzanne Cook-Greuter’s research on ego-identity. Cook-Greuter characterizes the enterprise as a “step-wise deconstruction of the subject/object split … [that] represents a differentiation away from the idea of a permanent, independent, separate self-identity.”