My Journey To Mindfulness

My Journey To Mindfulness

This is a sidebar to the following blog: Evolving Mindfulness, Part 1: The Rise of McMindfulness 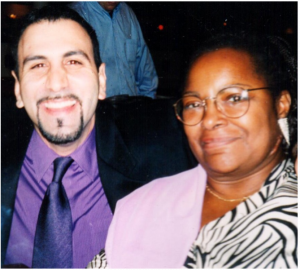 Tony Zampella and Devorah Gilbert in 2002.

My journey began in 2000 when, working with my mentor Devorah Gilbert, I recognized the wisdom she had developed from her time in an Ashram. As a faculty member, coach, consultant, and researcher in adult and leadership development, I would frequently come upon work from Eastern wisdom and Buddhist psychology. What did they know or experience?

After some investigation, I began an informal study into Buddhism and Eastern wisdom with Buddhism Plain and Simple, Zen Mind, Beginner’s Mind, and The Tao of Physics (to name a few).

I began to find that Buddhist studies bridged several Western paradigms (Integral Theory, developmental psychology, and adult learning) used in my academic research. My practice, however, was sporadic, mostly involving reflective techniques of pausing and taking several breaths before acting.

I knew that practice was important, so in 2005, I took a 30-day residency at a Zen Monastery led by John Daido Loori, Roshi. There, I discovered the writings by Thích Nhất Hạnh, which connected me with “mindfulness.” Practicing in the monastery meant daily silent time, meditating for 90-minute Zazen sessions 2–3 times a day, and a rigorous, precise work-study schedule.

During this residency, I connected with work by Thích Nhất Hạnh that invited a new relationship with anger through Anger: Wisdom for Cooling the Flames and Peace Is Every Step: The Path of Mindfulness in Everyday Life. See this tribute to his teachings on Mindfulness.

In Buddhism, anger (aversion, hatred, aggression, and self-loathing), greed/gasping, and ignorance encompass the three root Kleshas (poisons). In that monastery, I discovered the central role anger played in my life.

Rage led me to visit therapists since the age of 8, a result of the violent nature of my family. In the wake of my childhood, I lived with several caretakers, dropped out of high school (1982), confronted my sexual orientation, and came out (1984).

With therapy, I learned to cope with my past. However, my aggression, impatience, and sadness remained untouched and informed by an ego designed to protect me through its use of anger. In 2005, I connected mindfulness to Buddhist wisdom as a way to meet my anger, understand its flavor, and tame its desire.

In time, I began to see anger as the tension between hurt and hate. Throughout my life, whenever hurt or frustrated, anger filled me with racing thoughts and rushing sensations that bypassed the hurt and fueled my aggression. I found myself drawn to angry people, angry causes, and angry approaches. I was both a consumer and purveyor of anger. 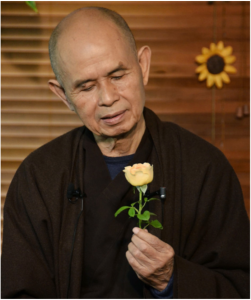 In the face of dozens of false starts in practicing meditation, I developed a commitment,  mostly because of how I discovered mindfulness.

Studying mindfulness through the work of Thích Nhất Hạnh—rather than from a workshop to reduce stress—connected me to an ethos. I saw how he used it to work with anger, sadness, and joy and appreciated the practice of compassion and wisdom drawn from these teachings. I also valued Buddhist ethics and wisdom, even if beyond me, and appreciated meditating in Sangha.

Still, it took me 15 years since my journey began in 2000 to develop a regular, consistent sitting practice that befriended my monkey mind to offer some presence.

In November 2014, I attended two days of teachings (16 hours) by the Dalai Lama in NYC. I understood perhaps 5% of what he said yet felt an urgency to deepen my study and practice.

Shortly thereafter, I entered more formal studies, deepened my mindfulness practice as part of Buddhist ethics, and brought these practices to our clients. It helped to have a team of colleagues willing to join me in this commitment.

The Ethics and Wisdom of Mindfulness

Even before taking my vows, I found refuge in Buddhist psychology grounded in the Four Noble Truths. When confused, its wisdom guided me in unlearning beliefs. Developing a relationship with my anger, I experienced greater discipline and patience—something quite unthinkable a few years ago. Sometimes, a mundane event can illuminate much.

Over a decade ago, I recalled spilling a glass of water on a coffee table and soaking the papers I was reading. In the past, I would have reacted aggressively, yelled at the table (yes!), and become judgmental, slamming the glass down.

But on this day, I looked at the puddle and began to chuckle—no aggression, judgment, or force. More surprisingly, there was no impulse or habitual energy to lash out or react.

Light and free, I grabbed paper towels to clean the mess. Similar incidents have occurred. In each instance, there’s been more space, a lighter self, and, often, humor.

Please understand that I am not suggesting my anger is gone. I simply no longer avoid or deny it and rarely judge it.

These are the moments that remind me of my mindfulness practice.

This is a sidebar to the following blog: Evolving Mindfulness, Part 1: The Rise of McMindfulness