This last week political and social commentator, David Brooks, leveraged our presidential campaign to explore some of our deeper social problems. The ideas deserve the deliberation of a couple of posts. In this post, I will explore our “national story” or identity, and next week I will explore how our worldview informs our leadership.

Brooks, who has connected discoveries in neuroscience with social policy, perhaps unwittingly, is confronting our fundamental Western identity. He invites scrutiny of our national story – the rugged individual, coming from rags to riches – as, he ponders…

“I don’t know what the new national story will be, but maybe it will be less individualistic and more redemptive. Maybe it will be a story about communities that heal those who suffer from

[many of society’s ills] or a story of those who triumph over the isolation, social instability, and dislocation so common today.”

“We’ll probably need a new definition of masculinity, too. … many groups … have lost an empire but not yet found a role. Men are the largest of those groups. The traditional masculine ideal isn’t working anymore. It leads to high dropout rates, high incarceration rates, low labor force participation rates. This is an economy that rewards emotional connection and verbal expressiveness,” Brooks asserts.

The impact of Brooks’ questions reveals the limits of our Western, Individual, and Masculine worldviews.

Maleness or “masculine energy” is our default and dominant American view. Much like the air we breathe, we tap its fuel to generate a life and define success.

Consider the example of our more recent focus on STEM in education – Science, Technology, Engineering, and Math. Where will these skills lead us: a world of coders and “logical, scientific” thinkers? What about creativity, imagination, communication?

The softer skills, referred by Brooks as “emotional connection and verbal expressiveness” have until recently been dismissed or diminished in business. We still find these relegated to second-tier, beneath their “analytical” counterparts. 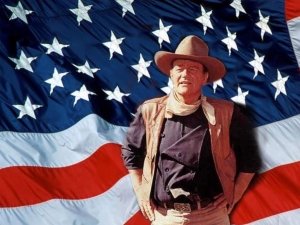 Ironically, the very compassion Brooks prescribes to support displaced and socially-isolated men, will require appreciating our feminine energy while recognizing the overuse of our masculine, individual, resolve. What’s more, collaboration will be “the necessary mindset” in our emerging future, which plays against another dimension of our worldview: individualism.

Brooks points to “outsiders” least associated with the “our national narrative.” Many of these outsiders are the focus of his displaced men, but many more are Millennials, who prefer meaningful and satisfying employment, and rail against the getting-ahead-at-all-costs mentality. Indeed, “just under half of all Millennials consider their overall benefits package to be very important for their job satisfaction, based on research by the Society for Human Resource Management.”

Outsiders of a Different Stripe

So what does this have to do with leadership? Consider, our two “outsider” presidential candidates, both challenging “established” norms: Bernie Sanders and Donald Trump.

Millennials coming of age in a connected and globalized community are choosing Bernie Sanders, whose solutions favor the collective good with more feminine and communal solutions. Donald Trump’s followers, however, embrace individualism and hyper-masculine solutions – more a backlash to the Millennials’ embrace. 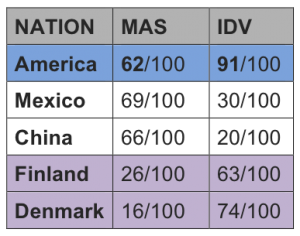 Both distrust the establishment but for very different reasons. Without evaluating candidates or policies, this moment discloses underlying worldviews. One side is imagining new norms; the other demands a return to previous norms. Review the rhetoric, policy proposals, and references to nations.

Trump’s focus on China and Mexico positions him against high-masculine nations, ready to wage a competitive battle, in a zero-sum game. Sanders’ rhetoric points to Denmark and Finland where citizens experience a higher quality of life. These nations also rank lowest along the masculine index.

Challenging fundamental norms can be threatening, especially for those faithful to the current worldview. It will involve questioning our fundamental beliefs – invisible, unexamined, assumptions – which influence our frames of reference, attitudes, and actions. For Americans, this involves questioning the dominant nature of our individual and masculine worldview.

Many leaders avoid taking on something they find disquieting or uncomfortable because it threatens their worldview (model of reality) or one of their frames of reference (mindsets). Moving beyond these frames can be awkward, and requires increasing self-awareness:

First, notice American values default to masculine norms for both genders; our society caters to its maleness, which is reinforced through an independent and individual mindset. How might we tap into feminine energy, beyond individual sex or gender?

Last year, Justice Ruth Bader Ginsberg, 83, speaking at Georgetown University recalled how often she is asked when there will be enough women on the supreme court? Her answer is “when there are nine.” Have we ever questioned two centuries of nine male justices?

Second, acknowledging the obvious is not an indictment, but an obviousness that has shaped what is progress, and defined what is success. We are at the end of this “shaping” – an expanded worldview is emerging. We see it in our institutions, our politics, business and media norms, and learning models.

Our focus on recycling and conservation, which have led to sustainability, is an example of cultivating feminine energy that transformed individual business concerns for the greater good of society. The seminal publication Silent Spring in 1962 by Rachel Carson began raising consciousness on our environment, which over time, impacted the way we engage business, produce and consume goods, and even how and what we drive.

Third, to expand our worldview will require first distinguishing our feminine assets as quite distinct (and not a mere extension) of those familiar and masculine assets.

Men and women who embrace their feminine energy create new levels of balance: Steve Jobs marries humanities and art with engineering and science to invent new designs for products and industries; Barack Obama joins justice with empathy to expand health care access, and negotiate climate change accords; Angela Merkel combines resolve with humanitarian needs to hold the European Union together in the face of financial concerns and refugees insurgency; Serena Williams binds discipline and grace to reinvent the game of tennis; and, researcher Jim Collins’ developed Level Five Leadership, which integrates humility and will.

Expanding our worldview offers unimaginable integration of both energies for a more inclusive and balanced culture that can embrace the fullness of human potential.

Brooks’ column pours these ideas, once thought of as New Age, marginal, or the province of OD professionals, onto the pages of our “paper of record.” His body of research relies on science to dissolve beliefs as to what actually impacts human beings. Funny that the maleness of science should find us tapping our feminine side—to mine that neglected half of our national story.

In doing so we are invited to challenge the limits of our current “national story” and worn-out, worldview. We’re just beginning to see the end of our “either/or” mentality: of our western mindset absent eastern worldviews; of our individual norms without collaborative attitudes; of our masculine ideals absent feminine values.

What’s next will look very different in our learning and leading, which I will preview in my next post.