The Dignity of Being Human

The Dignity of Being Human

We all possess dignity. Does that sound odd or even doubtful?

The inherent dignity of being human is often overlooked, as we reduce dignity to feelings of respect, admiration, or adoration.

While such traits may be useful and even necessary in some situations, dignity is more than a trait. It is a fundamental characteristic of being a human being.

With our current preoccupation with internet connections, social media postings, “likes,” and emojis, society tends to reward image and impressions. This finds us focusing on our appearance and the impression that we leave.

Such concerns work to strip away our own dignity. In doing so, we diminish our humanity—dismissing ourselves and each other as dignified beings.

What’s important now is less about the honor and wisdom of being human. We’ve been reduced—in a Pavlovian manner—that involves seeking instant gratification and succumbing to peer pressure, the effect of which has us feeling fragmented and isolated, having lost all sense of higher self.

To reclaim our dignity, we must examine some distinctions for clarifying terms we may conflate with dignity.

Dignity comes from the Latin word dignitas, meaning “to be worthy.”

The View: All people have the right to be recognized for their inherent humanity and treated justly. Dignity is a given. Dignity identifies a worthy, high, and honorable condition as part of being human. You have dignity just as you breathe and experience things. No one can take your dignity away from you without your participation, and you cannot diminish it in another.

Respect comes from the Latin word respectus, meaning “to look back at.”

The View: Respect implies a review of what a person has seen or experienced; this individual is held in esteem because of their abilities, qualities, or achievements. Respect is earned. You are respected by others for what you achieve and experience and how you handle yourself as you achieve accomplishments.

Admiration comes from the Latin word mir, meaning “to wonder.”

Polite(ness) comes from the Latin word politus, meaning “polished, or made smooth.”

The View: Our concern here leans into courtesy and etiquette toward others. This is the essence of politeness, or focusing on how you present yourself in front of others.

Much of our confusion today seems to center around dignity and respect, which I will explore further to offer a deeper understanding of dignity.

In today’s culture, respect seems to be a catchall of standards and behaviors. We assess someone as respectable or respectful in an admiring way. This implies the viewpoint or ideal of the observer, elevating that view as deserving of respect. 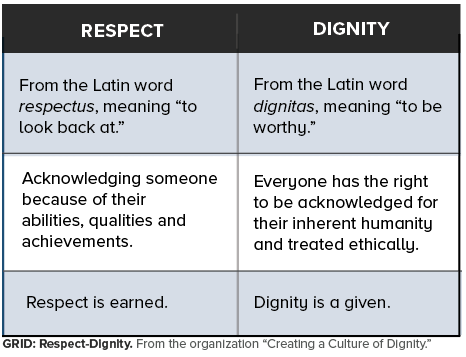 People have dignity regardless of whether they are respected by others. It can be difficult to respect a person of little dignity.

Respect acknowledges behaviors, attributes, and experiences, while dignity teaches the importance of honor and humanity.

Dignity and respect may seem like the same thing; however, important distinctions must be made—if for no other reason than to cultivate our capacity for dignity in granting humanity.

So, if dignity is inherent to honoring our humanity, why do we fail to recognize this in people we don’t respect?

Dignity grants the existence of humanity. What it means to be human is experienced in our being with one another. Being with all of humanity allows for humanness in each of us and invites us to expand our perspectives of being human.

From an ontological standpoint, dignity is as necessary to being a human as the body. If we ignore our body for too long (even in terms of basic hygiene), it will no longer work for us. Yet, we disregard our dignity regularly.

From a Buddhist perspective, people merit decent treatment because they possess human dignity, a feeling of inherent worth that is theirs due to the simple fact that they’re human. We need no notion of a fixed self to honor a common humanity; hopes, dreams, aspirations, and fears, which all people have, are part of our presence in this life.

Tapping into this common humanity, often via self-compassion, invites access to dignity.

Loss of Dignity: Being Indignant

In recent news, Ukraine has been discussed frequently. In 2014, the Ukrainian people led a demonstration called the Revolution of Dignity, which found them reaffirming their national honor and inherent worth.

The Ukrainians named this demonstration as such for that very reason: to tell the world broadly and remind Russia specifically of their inherent worth. With this action, Ukraine had little concern about whether Russia respected them; that is a different question entirely and perhaps not worth taking to the streets over.

To many, these actions may not have been considered respectable. Still, the Ukrainian people were willing to be indignant to reclaim their dignity.

Icons such as Colin Kaepernick today, and Muhammad Ali decades ago, have become despised by some. Yet, these individuals’ actions only revealed indignance toward undignified policies and practices. They reclaimed dignity, reaching beyond their own desires; they were willing to risk their respect for an idea, or a nation. 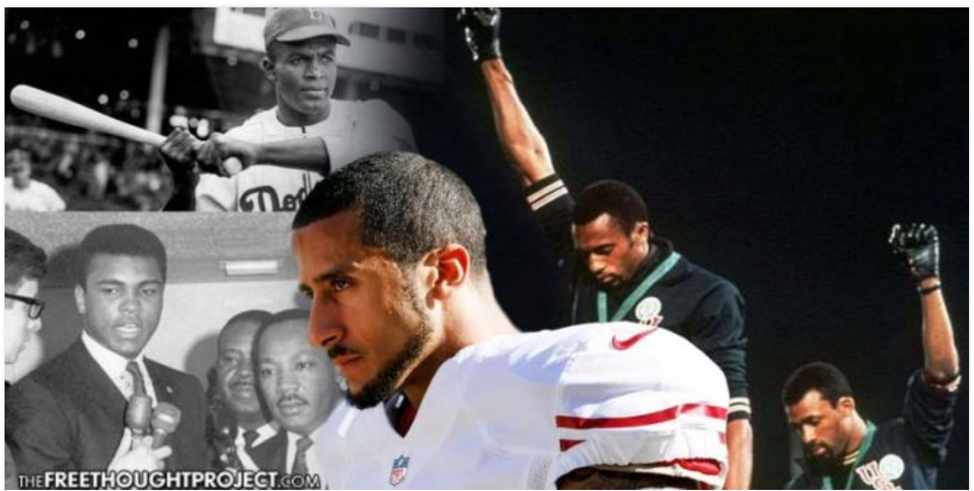 Loss and Restoration of Dignity

As humans, dignity is as critical to our being as breathing, nourishment, and love.

Losing our dignity, often through a self-betrayal, is not only crushing to our sense of self but can also find us unable to observe dignity in others. We are no longer present to our humanity.

Paraphrasing scholar and author Fernando Flores’ words regarding our own dignity,

As human beings, we are concerned that our actions and possibilities are valuable and come from our own integrity—that we act consistently within our own declarations of standards for action.

Practicing dignity requires taking time to reflect on it—to notice our consumption, conversations, or concerns that may strip us of our dignity. To notice where we may betray ourselves. Much of this can begin with the following dignity ritual:

As we enter the holiday season each year, our principles become even more important and valuable. Sending a card with a heartfelt expression of gratitude can support and reclaim much of the dignity that is the promise of this season.