The Possibility of Being Ordinary

The Possibility of Being Ordinary

I am ordinary, average. Or maybe I should say that I fear I am average—not unique, not extraordinary. Just ordinary.

In Western society, the pressure to be more than ordinary is pervasive and constant. Everyone wants to be recognized as special.

Yet, this past week in the U.S., we honored 20 years since 9/11 and marked 18 months of living with the pandemic. We honored the ordinary: people showing up to work, saving lives, caring for others, and even giving their own lives.

This inexhaustible human compassion, while ordinary, is often overlooked and underappreciated.

What if the obsession with striving for extraordinary produces its own trap?

When being extraordinary overrides being human, we find “self-help” gurus and programs for “transformation,” books that emphasize “the self,” and commercials and professions that push extraordinary results. Even the coaching field leans into this puffed-up, performative perception that celebrates “extraordinary.”

We strive to best other humans in some extraordinary way rather than being fully human in a most ordinary way.

Who wouldn’t crave these qualities? We seek this elusive feeling while our planet burns, floods ravage our communities, and more species become extinct.

This trap leads to a dead end.

We strive to best other humans in some extraordinary way rather than being fully human in a most ordinary way.

This pursuit of being “extraordinary” leaves us exhausted and empty, feeling inferior and insufficient, striving for abundance that encourages scarcity.

We accept scarcity as the state of being in short supply, as lacking, or insufficient. We define its opposite—abundance—as existing in large quantities or plentiful, ample, lavish, and generous.

These concepts define our problem. Ironically, this plentiful notion of abundance, when internalized, finds us lacking. Rather than proclaim sufficiency, this view provokes wants—the need to seek more, to be extraordinary. Being sufficient or ordinary just won’t do.

What if we reframe abundant as enough to scarcity’s not enough? Framing abundance as “enough” aligns with our notion of satisfaction. In Latin, satisfaction means “enough” action.

“Enough” may be the critical discovery for being fully human.

Such a framework appreciates a paradox: being boundless depends on dissatisfaction, yet setting limits leads to satisfaction. We acknowledge the value of enough action rather than celebrate endless action.

Think about this: Have you ever heard a CEO declare enough profit, enough work, enough stress, enough productivity, or enough resources? Sacrilege!

In all facets of life, boundaries exist to satisfy. With enough sleep, I feel rested. With enough exercise, I gain energy. With enough food, I feel satiated. To satiate, the root of satisfy, is to gratify—to be grateful for enough. Overdoing these activities makes me feel drained, bloated, exhausted, or depleted.

“Enough” may be the critical discovery for being fully human. 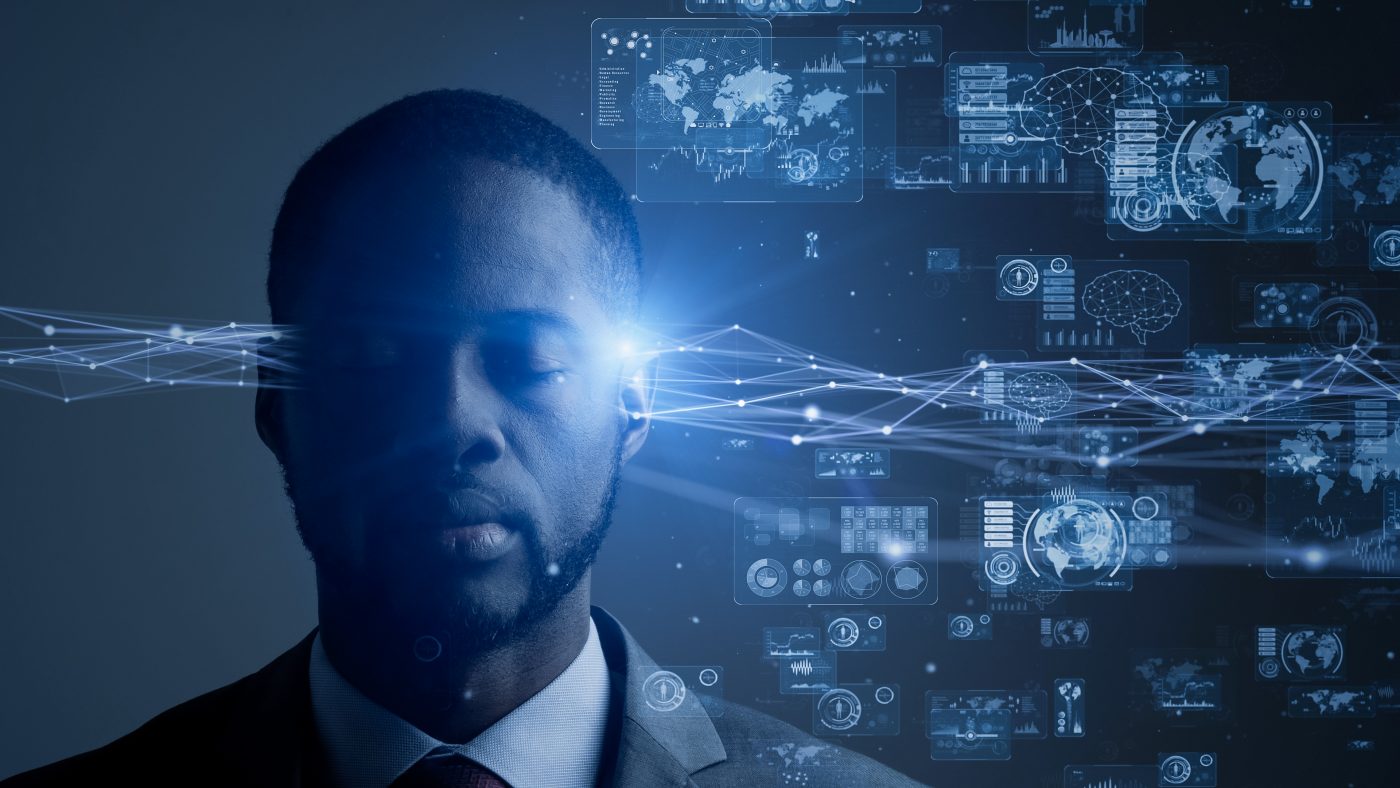 What if Americans became just 10% more self-aware, more grateful? We’d consume far less. We’d be less susceptible to ads, fear, and FOMO. We’d find out that contentment is much closer to us than the check-out line. We’d become immune to the market’s messaging of want and greed.

Increasing our self-awareness by just 10% would undermine a consumption-based economy that relies on our dissatisfaction for 70% of its growth.

Being extraordinary is not only big business; it also fuels big business. It is the ideal “identity” for spurring dissatisfaction: becoming special by consuming more and bigger. No one wants to seem irrelevant, small, or trivial.

In his bi-weekly Atlantic column on meaning and happiness, Arthur Brooks stresses, “[A]s society gets richer, people chase the wrong things.” He questions, “Are We Trading Our Happiness for Modern Comforts?”

Brooks quotes Swedish business professor Carl Cederström, who argues in his book The Happiness Fantasy, that:

… corporations and advertisers have promised satisfaction, but have led people instead into a rat race of joyless production and consumption. Though the material comforts of life in the U.S. have increased for many of its citizens, those things don’t give life meaning.

A recent survey by Credit Karma found that the pandemic may have interrupted and thus affected Americans’ compulsive consumerism.

FOMO-related spending is now viewed as less essential. Almost half (44%) of the respondents felt “less pressure to spend money to keep up with appearances.” The top five reexamined areas were dining out (47%), going to a movie theater (37%), live music or entertainment (28%), gym memberships (27%), and clothing (26%).

So then, being extraordinary becomes the overachieving identity.

Our fixation on extraordinary success schedules our children’s lives from age 2 to 24 with pre-pre-school, playdates, extracurricular activities, prep-testing, and testing so that they can seize select colleges, accumulate college debt, and lock in high-pressure jobs to continue the cycle.

The elegy of the Mexican Fisherman and the Harvard MBA offers an apt, even humorous, view of striving to seek out what we already possess.

This identity, while useful for consumption, has proven to be a trap in achieving satisfaction.

In my more than 20 years of working with an array of professionals, two trends have persisted. With all our advancements, people have become 1) more frenzied, frazzled and feeing behind while 2) being less available, satisfied, and content.

Something is broken with our devotion to this “extraordinary” identity.

An Extra Helping of Ordinary

What if the opposite of our notion of “extraordinary” were true—that extra-ordinary requires possessing an extra helping of ordinary.

We become aware of that which possesses our humanity, rather than possessing more as humans.

To possess our humanity, we appreciate ordinary truth.

Being ordinary means being in the real world, rather than withdrawing to a “fantasy world” each time the real world becomes uncomfortable.

The average and ordinary truth—which we often dismiss and skate past—reveals in its detail the abundance of life—what is “enough” to be fully human.

We become aware of that which possesses our humanity, rather than possessing more as humans.

Access to the ordinary is not a mystery or mystical.

Buddhist scholar and teacher Chögyam Trungpa implores us “to be honest, real, and very earthy … to really appreciate things as they are. They are so beautiful and wonderful already, but in order to appreciate that, it takes time and discipline – so much discipline. … you go slowly through the beautiful process of perception: the sense of being, the sense of doing, and the sense of linking together.”

We can access the “beautiful process of perception” with disciplined awareness, attention, and concentration.

Attention is like sunshine on a plant; it provides raw energy to sustain growth.

For instance, studies have shown that the amount of time parents spend with their children is not as important as the quality of that time. Are you paying attention to the child and interested in their activity, or are you reading, on the computer, or multitasking? 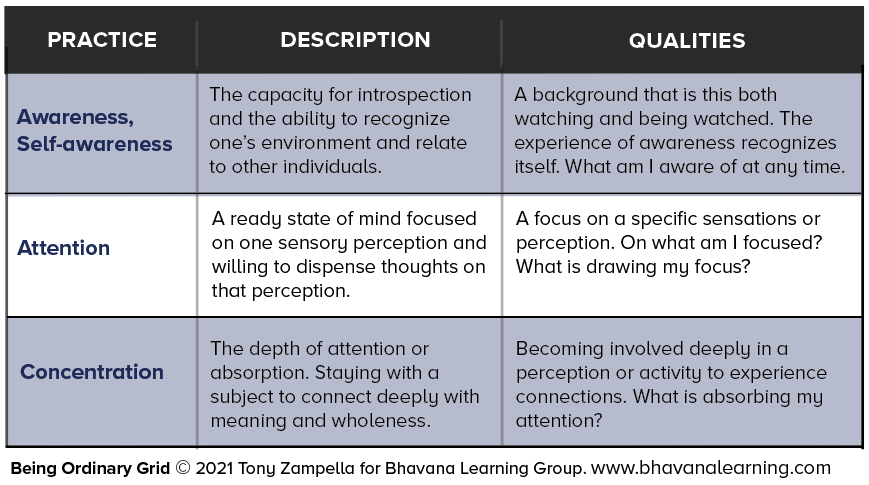 On a global level, we experienced this deeper humanity 20 years ago, when first responders and volunteers healed a city and nation, and again this past year, when so many workers kept us breathing.

In our daily lives, we can experience the sense of being, sense of doing, and sense of linking together as we respond to a client’s email, notice a glitch in the system, cook dinner, or play with our children.

Ordinary truth is omnipresent. Take time to discern and discover it brings wisdom to our moment-to-moment existence. Accessing its experience is satisfying—even “special”—and dissolves all other needs. We experience the joy of “enough” and the possibility of gratefulness.